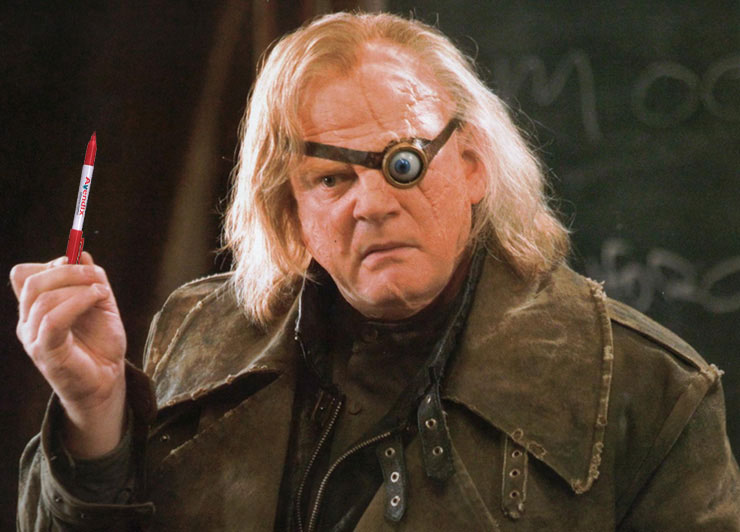 While updating a profile on another site I saw a “Random Question” that I found amusing. I wrote out a series of answers that wouldn’t post (due to the answer having a limit of 150 words), so, here’s my unedited answer! I should mention, for those that don’t know, I used to teach in classroom settings quite a bit, and magic markers were always a pain to work with!

What spells can you cast with magic markers?

First off is the spell of permanence, the one that makes the most lame thing you could have written, remain on the white board regardless of what you use to erase it!

Second is the spell of the marked one, which really isn’t so much casting a spell, but casting the marker at the student/audience member in the back of the room that just won’t stop casting his/her spell of annoyance over the entire room! When casting this “spell” do so with the cap off so it marks him/her right on the forehead, and for a longer lasting incantation, try casting this spell at the same time as the spell of permanence.

Last is the spell of silence. This is the magical ability to write a few words on the board, whether it be for a class you are teaching or a seminar you are presenting, that leaves your entire audience silent. This spell tends to be very powerful when writing extremely inspired statements, thus providing the reader(s) with an epiphany, but tends to be at it’s most powerful when writing questions that have no possible answer, or statements so ridiculous as to bring your credentials as a teacher and/or presenter into question! Caution, this spell often invokes the spell of permanence, thus effecting anyone that may enter the room later. If this spell shows no sign of wearing off try casting the spell of the marked one on the entire group to break the spell! This may, however, still bring your credentials into question!

Photo from Harry Potter and the Goblet of Fire
pilferred from the internet, and modified