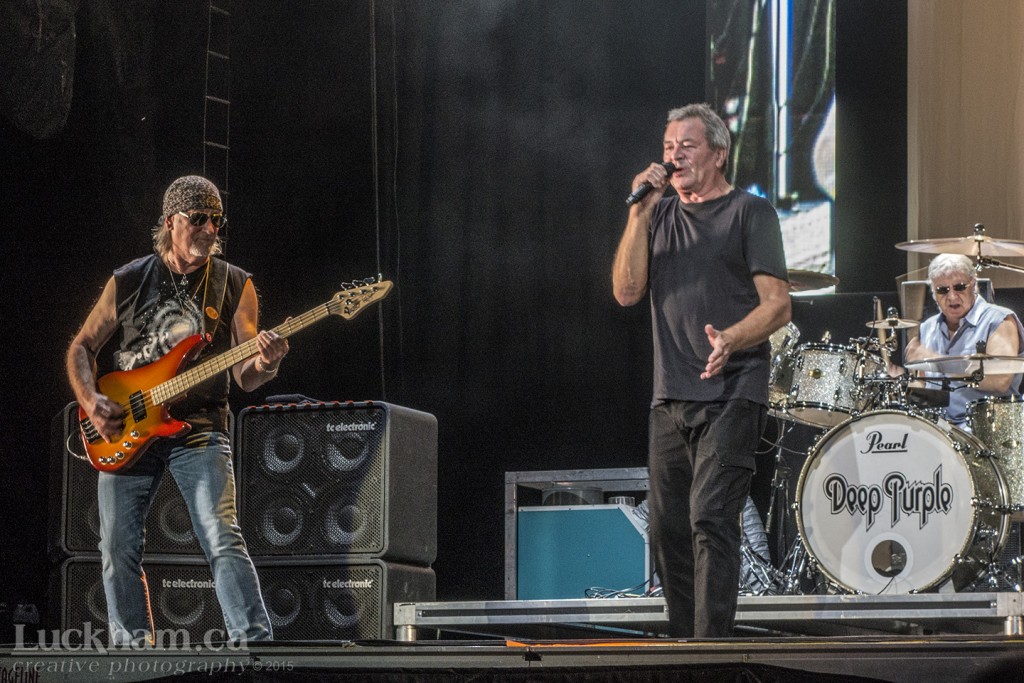 This is Roger Glover, Ian Gillan and Ian Paice original members from the Deep Purple Mark II line-up of 1969. Ian Paice is the only original member from the 1968 Mark I line-up. Add Steve Morse and Don Airey to the lineup and you have the current Deep Purple Mark VIII lineup. This show was the musical highlight of the year for me and one of the best shows I’ve ever seen.

Another Bluesfest is over and I have a lot of photos to share, but I want to begin with this post about one show in particular. Now, I realize it’s a very subjective thing to say, but for me Deep Purple was the best show of Bluesfest 2015, the best show of 2015, and has to be one of the best shows I’ve ever seen! There was so much that was amazing about this show, but the things that can make a show this great are more than just the show itself. Let me explain…

In 1970, when I was 11 years old I heard the song Black Night on the radio and thought it was brilliant, so I went to the store to buy the new album Deep Purple In Rock. This was only the second album I had ever bought for myself, so you can imagine how disappointed I was when I got home only to discover that Black Night wasn’t on it. It turns out the song wasn’t on the album as it was a song they only released as a single. Truth be told though, I wasn’t disappointed, how could one be disappointed with an album that included Child in Time and Speed King… legendary! I fell in love with the song Child In Time from the moment I heard it and it has been one of my favourite songs of all time! From that Ian Gillan voice that goes from a whisper to a scream and stays in tune, to the incredible guitar work of Ritchie Blackmore (born in Weston-super-Mare, a town in Somerset, England where my family have and still live), that Hammond Organ sound with Leslie Speakers of the late Jon Lord, and the driving force of Roger Glover on bass and Ian Paice on drums… I dare you to listen and not say Wow, now that’s Rock ‘n’ Roll!

I became a big fan of Deep Purple then, buying all their albums, especially enjoying the ‘Rock Band meet Orchestra’ machination of Concerto for Group and Orchestra, so yes I was a pre-Smoke on the Water Deep Purple fan. Strangely though I’d never seen Deep Purple live, and here I was a Deep Purple Live virgin and up on stage was Ian Gillan, Roger Glover and Ian Paice from the 1970s recording I first heard, joined by Don Airey (who was keyboardist for many other bands including another favourite of mine Ritchie Blackmore’s Rainbow) and Steve Morse (an incredible guitarist who I’ve been a fan of for a long time, any album by the Dixie Dregs will tell you why). I would have loved to have heard Child In Time performed live, but I knew that wouldn’t be, as the last time Ian Gillan sang the song was in 2002 and is unable to reach the notes needed to sing the song now. That one song aside, the show was all I could have wanted it to be and then some! I hadn’t known it at the time but when I was looking up some details on the history of Deep Purple’s line up changes, I read that when keyboardist Jon Lord retired, he left his Hammond Organ to his replacement Don Airey… so Jon was kind of there, in spirit… that is very cool! One of the biggest highlights of the show though was the very last song, part of a 2 song encore… Black Night… so, as it began, so it ends.

If you were at Bluesfest, you will probably enjoy these photos, and if you were too lazy to get out to Bluesfest on July 18th, check out the video below of Deep Purple playing just that… Lazy… you’re welcome!

Here’s a slide show of all my shots of Deep Purple at Bluesfest on July 18th, 2015… just click the play button in the corner or click through at your leisure.

And here’s a video I shot of Deep Purple playing Lazy from the 1972 Machine Head album.