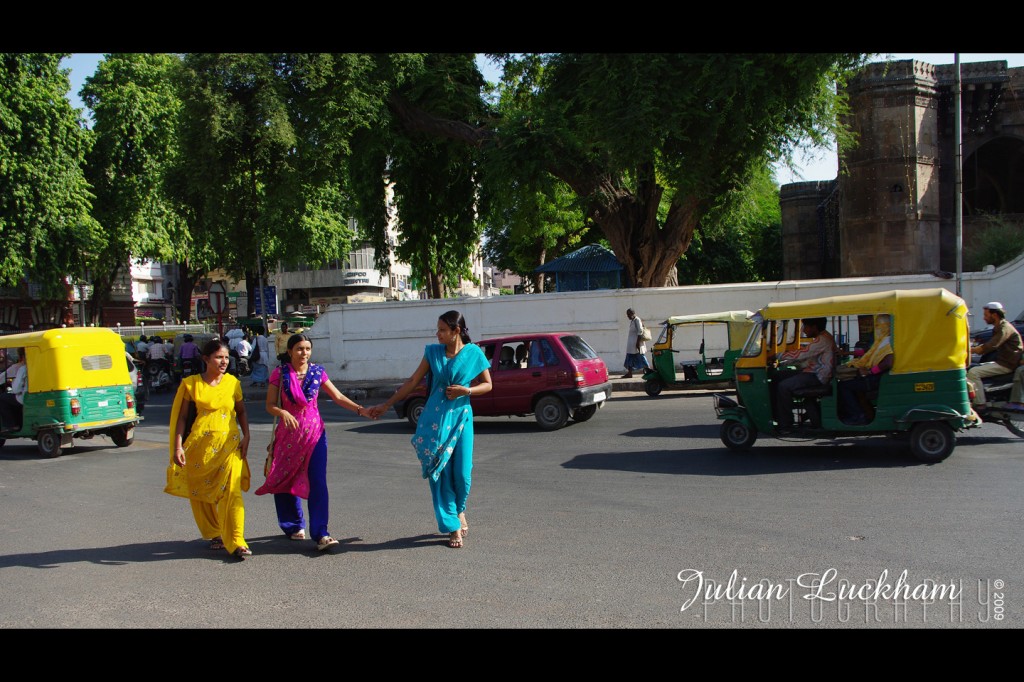 The Colours of Ahmedabad – September 19, 2009 - Ahmedabad, Gujarat, India - It's very late... here in India! It's 12:45 a.m. but I wanted to post at least one shot from today before I go to bed, I took a very quick look through some of my shots and this one kind of jumped out at me, primarily because of the colour and the contact between the two women. I have found my first day in India very disconcerting, seeing this shot made me realize there is beauty to be seen here as well if you allow yourself to see it! Shot from the hip!

I went to see The Best Exotic Marigold Hotel last night, it’s a beautiful film if you haven’t seen it. As I commented over on Facebook after I saw it, “It’s a beautiful film whether you’ve been to India or not. But if you have been to India and you loved it as I did, you really do have to see this beautiful film! There is so much truth to this film real and implied. And what an amazing ensemble of actors.” Seeing the film made me want to go through all my photos that I have yet to process and post, but instead I just want to share this one and tell you of the truth this film speaks…

In the film The Best Exotic Marigold Hotel, a group of British retirees decide to move to India. On arrival they discover that the Hotel looks nothing like it did in the brochure, the manager comments, “In India, there is a saying – Everything will be all right in the end… If it’s not all right, then it is not yet the end …”.

I want to preface this story by repeating something, “I’ve been to India and I loved it”!

I went to India in 2009 on business, I was going to be there for three weeks, my initial arrival did not go well, and my first day was, as I wrote back then, disconcerting! My first purchase, at the airport, was a bottle of water, 30 rupees, I gave him 200 rupees and he gave me 70 back! I might not know the country well, but I can count, not sure if it was deliberate or not. I was supposed to be picked up at the airport by someone from the Hotel, I wasn’t and had to make my own way there, it was 3:00 in the morning! There was a horde of taxis more than willing to take me anywhere, yet I was unable to communicate with any of them that I was expecting a cab from the Hotel. Finally a soldier/security (?) told me to go back inside and speak to someone at the prepaid taxi desk. They said they would take me to my Hotel and the Hotel would pay for the fare. You’re way ahead of me aren’t you? Nope, they didn’t pay for it! The Hotel had no information about when I was arriving, I should have called the Hotel. Silly me, I was looking for someone holding a card with my name on it! Driving through Ahmedabad at 3 in the morning was a shock, people sleeping on the side of the road, it looked as though everyone had been evicted from buildings all at once! So many dogs running in the middle of the road, I literally felt like crying! I have never felt so alone in all my life, I didn’t know my way around, I didn’t know the language and I did not know the etiquette! The time difference of 9 1/2 hours is so significant that you can’t just phone home when you need someone to talk to. My first email the next day, when I finally had internet began with “OH MY GOD!” and it ended with a plea to make contact!

“In India, there is a saying – Everything will be all right in the end… If it’s not all right, then it is not yet the end …”. How true that is!

Once I read my email reply the next day and I knew that someone 12,000 km away was thinking of me, hoping I was safe and would be staying up to wait for my call, it made it all feel a bit better, I didn’t feel so alone! I arrived in India during a holiday so I had some time to myself, before beginning the work I was to do. My first excursion was to visit Gandhi’s Ashram, which was both a scary adventure and a moving experience!  But more about that in another story, this post isn’t going to be a day by day account of my trip, though I will share more of my experiences later. For now I’ll fast forward and tell you that as the days progressed a lot happened both good and bad. There were times I just wanted to go home and others where the experience was taking me to emotional places I had never imagined. It was, as is depicted in The Best Exotic Marigold Hotel, a moving and not life altering, but spirit altering, experience. In the end… everything was all right! When I said goodbye to the women of SEWA, who I was working with in Ahmedabad, they thanked me for the wonderful help I’d been and was asked to come back, they said goodbye to “Julianben”, ben being a Gujarati term of honour meaning brother. I am so thankful for the experience I had, and I hope that one day I can return… thankfully I have my photographs, so I can virtually return whenever I want.

Over a year later I met Renana, one of the women of SEWA again while on a trip to Madrid, when everyone was introducing themselves we were told to tell everyone your name and something you want to share, when Renana stood up and introduced herself, she said that when she was leaving Ahmedabad everyone was coming to her and saying “Say Hello to Julianben!”. 🙂

The photo above was taken on the street in Ahmedabad, Gujarat, India. It was the first photo I posted after I arrived in India and the caption is exactly what I wrote the day I posted it. It speaks to what one character in The Best Exotic Marigold Hotel says about India when he is asked what it is he likes about the country… “The light, the colours, the smiles. The way the people see life as a gift, a privilege — and not a right. All life is here”. If you visit India yourself, you’ll discover how true that is.

© Copyright, Julian Luckham, 2012/2009, All rights reserved. This photo/artwork and story should not be used in any way without my explicit permission.