That morning I was not yet a vampire, and I saw my last sunrise. I remember it completely, and yet I can’t recall any sunrise before it. I watched its whole magnificence for the last time as if it were the first. And then I said farewell to sun light, and set out to become what I became.

Louis from Interview with the Vampire: The Vampire Chronicles by Anne Rice 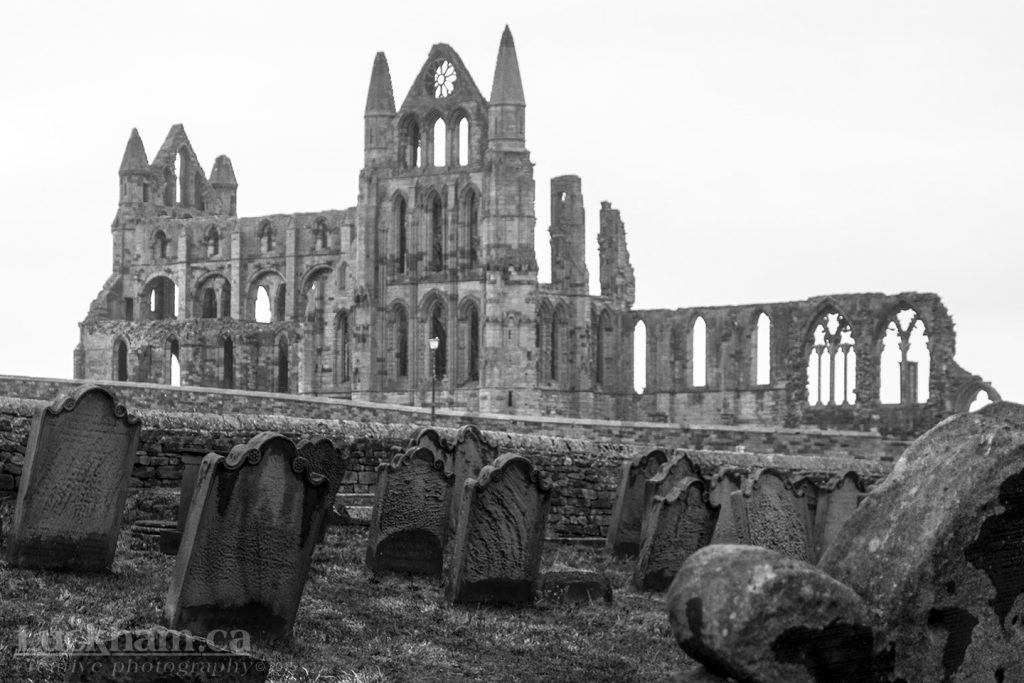 I have long had a fascination for Vampire Lore, from Bram Stoker’s classic Dracula, to the ‘60s gothic horror soap opera, Dark Shadows, to Anne Rice’s The Vampire Chronicles, to my favourite ‘vampire’ movie to date, Only Lovers Left Alive. I have a collection of movies, books and various pieces of memorabilia, which most of my friends have just passed off as a strange aberration in my character. It is a fascination that some do question and I have tried to explain… which brings me to this post.

Back in 2006 I began writing a story with the hope of one day making a feature film of it, I did do a short film, a proof of concept if you will, but more on that later. The above photo of the Gothic ruins of Whitby Abbey and the graveyard at St. Mary’s Church was taken in Whitby, Yorkshire, England. Whitby is where Bram Stoker was living when he began writing Dracula, and a place I visited and explored in 2015. When time permits I’ll add a new post about walking in the path of Bram Stoker.

I will never be able to fully explain what it is that draws me to the stories of these creatures of the night, unless you have read the stories of Dracula, or Louis and Lestat from The Vampire Chronicles, and felt their undying pain, or you saw Dracula: The Chamber Musical, and heard Dracula cry out, “Let the Night Begin”. However, I will try….

In the 1992 Francis Ford Coppola remake of Dracula, Gary Oldman as the Count tells Mina, the reincarnation of his long lost love, that the only way they can be together is for him to condemn her to a living death. “To eternal hunger for living blood.” And in a moments hesitation he cries out, “I… love you too much to condemn you”. So much for the long dead, blood sucking, evil vampire!

In 1997, the 100th Anniversary of Bram Stoker’s Dracula, the Royal Winnipeg Ballet commissioned a full length ballet based on Dracula. “A legend burned into the public’s psyche over the past 100 years, evoking dread and horror but most of all fascination. A classic novel and the subject of countless movies since the earliest days of celluloid Dracula is brought to life once again by Canada’s Royal Winnipeg Ballet.” This ballet gave Dracula the silent treatment, in that there was no dialogue and the ballet was performed to the music of Gustav Mahler, yet the story, familiar to so many, still evoked a true sense of the vampire and the polarity of his existence.

In the 1997 Stratford Festival’s 100th Anniversary tribute production Dracula: The Chamber Musical, the song ‘Let the Night Begin’, first suggests a vampire that can’t wait to rise from his coffin and head out into the night to seek out his prey. Later on we hear Dracula’s victim, Lucy, sing of her desire to prowl the night with her master, “So let desire drive all sorrow from my skin, then let my master thrive and let the night begin”.  At the end of the musical, we hear Dracula speak the words once again, but this time in hopes of a real death! Eternal life alone, is far worse than death!

In Anne Rice’s The Vampire Chronicles, we follow the lives… deaths… of Lestat and Louis through hundreds of years of trying to deal with the unwanted curse that has been thrust upon them. How do you keep continuity to an existence that lasts longer than any human life? Turning someone into a vampire, is not exactly the act of a friend or lover. How does one quench an eternal thirst for blood without killing? Feeding on rats or birds only pushes one closer to the edge of an insatiable hunger! Finally, preying on murderers, and sometimes the half dead, allows the vampire to justify his existence! Such trials of human spirit, even in the undead, are part of the appeal of all this vampire lore! With Anne Rice’s books, there’s also the appeal of the strong backdrop of history, and maybe even those familiar dreams or past life memories of when I walked this earth… before!

In reference to a more recent vampire films, Let Me In, that goes down the sympathetic road, Roger Ebert said “Those hoping to see a ‘vampire movie’ will be surprised by a good film”. Let Me In is a story about a vampire girl who feels pity for a young bullied boy and chooses to protect him in spite of her own tragic life. Ebert is right, this is a good film, it’s not just a vampire movie, this film doesn’t hold back, and in my opinion puts ‘Twilight’ to shame. And last, I’ll mention my all time favourite vampire film, Only Lovers Left Alive. This is another film that takes a different road and depicts two vampires who have been a part of each other’s lives for an eternity and take time apart from time to time. Rather than killing, they get blood from other sources, I’ll leave that for the film to explain. This once again challenges the typical evil vampire scenario we are used to. My favourite line from this film says so much about the human condition, let alone that of the undead! “How can you have lived for so long and still not get it: this self-obsession is a waste of living, that could be spent on surviving things, appreciating nature, nurturing kindness and friendship, and dancing. You have been pretty lucky in love though, if I may say so.”

My short film, and more so what I finally create will go down the same road and I hope that viewers will feel that the ‘vampire story’ is secondary to a ‘good story’. So yeah, a vampire movie! I know… it’s been done… but not the one in my head! I’d tell you more, but I don’t want to give away too much just yet, I’ll post again or add to this if I find I want to share more as the story/movie unfolds. An interesting piece of trivia from Wikipedia, “As of 2009, an estimated 217 films feature Dracula in a major role, a number second only to Sherlock Holmes (223 films).”

This mock movie poster was created just for fun and is not represenataive of my short film.
© 2006 Julian, update © 2015 Julian. All photography and image editing © 2006/2015 Julian Luckham