As a presenter for 72 Hour Films SPARTA LXXII Film Challenge we were asked to do a short promo to be played at the Mayfair Theatre before the Screenings of the SPARTA films. This time around we went with something more traditional, showing some of what we do and who we work with, so with the help of filmmaker Kevin Straw and Francko Edge, Allen Roulston, Steven Jones (is that really you) and my daughter Caitlin Luckham we put this promo together with some rather exciting news at the end. I hope you enjoy it! 🙂

With Sparta all filmmakers have to make sure their films adhere to certain ‘catch’ criteria, elements that must be included in the film that are announced the day filming begins. This makes certain that all films are made within the 72 hour period. Even though my promo is not a part of the competition, I like to try to include the catch criteria. So see if you can find them in my promo, they were: 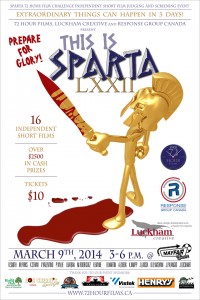 This short promo for Luckham Creative was written, produced and directed by Julian Luckham and shot and edited by Kevin Straw. If you’d like to see our previous Sparta promos, click here.

If you need a company with a lot of creative ideas and a passion for creativity, let’s talk!

And if you’re curious about 72 Hour Films, check them out here: http://www.72hourfilms.ca

This is the poster we designed for SPARTA LXXII.