If you’re from Ottawa you will love this story, if you are a member of the Ottawa Greek Community you will really love this story, and if you enjoy stories of serendipity or coincidences or whatever you care to call it, you’ll think this is pretty cool! As you may or may not know, I am on a trip I’ve been referring to as ‘Wherever I Wander‘, mainly to keep the 2 month trip a surprise to everyone following me here or on Facebook, but also because I don’t even completely know where I’m going to go… it’s that kind of trip! LOL!

So, what’s the story? The past week I have been in Greece, I spent a couple of days in Athens and am now on the beautiful island of Santorini. On my first night I decided to go to Bella Thira, a restaurant just around the corner from Veranda View where I’m staying in the village of Imerovigli. Shortly after I ordered at the restaurant they suffered a power failure, which had me worried I might not be eating this night. My fears were quickly waylaid when my first dish was served up, an incredibly delicious dish called Santorini Eggplant. Overall the whole meal was very impressive, as was the service and price.

Now comes the start of  the serendipity, prior to the power failure a TV screen in the restaurant was showing different things that I didn’t really pay much attention to, being too focused on the food before me, after the power failure though that changed when what I was seeing on the TV was looking strangely familiar, I decided not to say anything without confirming my thoughts when I got back to where I was staying. Given all the excitement of this trip though, I forgot and days went by. 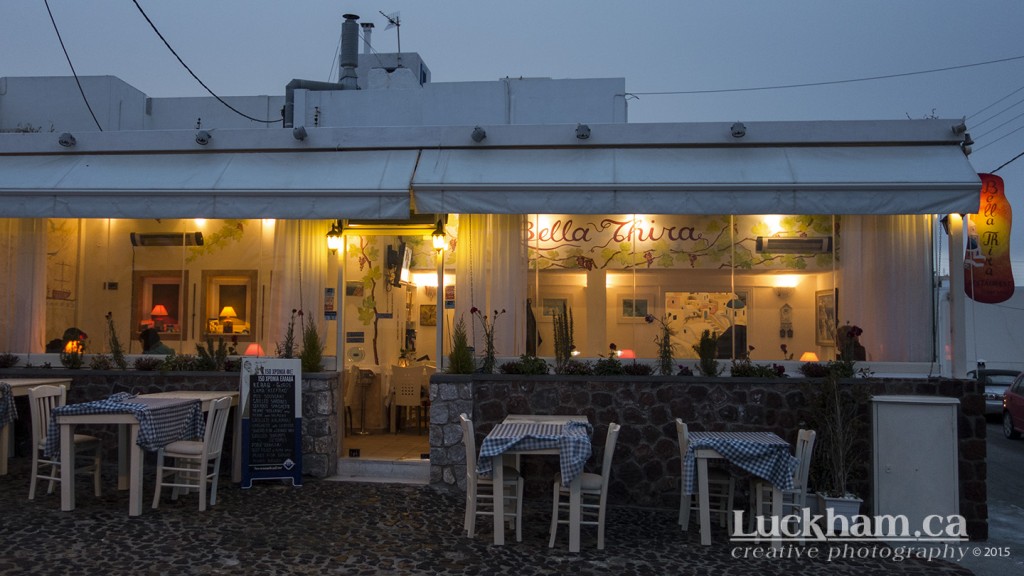 Today I headed out for my last day of exploring Santorini. The day started well enough, Skyping with my daughter Caitlin and showing her the view (photo above) and then heading out to wander around the lanes of Fira, also known as Thira, the capital city of Santorini Island to do some shopping and have lunch at another favourite restaurant Lucky’s Souvlaki, I know…! For the afternoon I had planned to visit a local Winery, but after arriving by bus I discovered they were closed, this was disappointing and now I was at a loss of what to do as I was literally in the middle of nowhere, but I’ve always believed that if a day begins to go bad you still have the opportunity to turn it around, so as I wasn’t too far from the village of Perissa, and I love to walk, I just began walking. Just before I arrive in Perissa my day took it’s serendipitous turn… Perissa is quite a distance from Imerovigli where I’m staying, so to see my host from Veranda View pull up in her car and offer me a ride was quite the coincidence. Antonia was heading to Perissa to meet up with a friend to go fishing! As we drive, I tell Antonia about the Winery being closed and she tells me she feels really bad about that, but is then interrupted by a call from her friend to say she can’t make it to go fishing. Antonia suggests I come with her and take some pictures and then she can drive me home, I told her I had already planned to go in to Fira after, so she says that’s fine I will drop you off there after we go fishing. Just to make sure this story doesn’t turn in to a novel I’ll cut to the chase, it starts to rain and now I’m reconsidering going in to Fira as the walk home would become unpleasant with my not having an umbrella with me. I decide that I’ll go back with Antonia and then go have dinner at Bella Thira again, on this my last night on Santorini. That’s when I remember the video. So Antonia graciously drives me back and even gives me fresh farm eggs for my breakfast tomorrow. This day has certainly turned around! Once I get back I start looking for this video that I’m pretty sure I saw at the restaurant the other night… and to be honest I was expecting to be wrong, given how far from home I am, so I was very surprised to discover that I was right! Here’s this little restaurant in Imerovigli on Santorini Island, Greece playing a video of the Official Ottawa Greek Festival (GreekFest) Flash Mob from August, 2011! Now that’s what I call serendipity! Now I’m going back, not only because it’s a great restaurant, but all the serendipity to get me there was just too much… but wait… I walk down to the restaurant and take a few pictures before I go in, but before I do the owner sees me and waves for me to come in, that’s odd I think to myself. I signal to him that I will and I’m just going to take a couple of pictures. As I come back he comes out to give me a scarf I left behind, but the strange thing is, I did have a purple scarf but this purple scarf wasn’t mine! “Okay Zeus… I’m going back in to the restaurant already, you can stop with all this serendipity!”

a custom panorama of a quiet dining area in the restaurant with amazing wall murals of Santorini.

As it turns out, the restaurant didn’t know the video was a Greek Festival in Ottawa they had been told it was somewhere in the U.S., so I put them right and told them it was in the Byward Market in Ottawa and that friends of mine were even amongst those dancing in the streets. So there it is, I thought this was just way too cool not to share, I hope you agree and have enjoyed this moment of Serendipity in Santorini! Now go out and share this cool story with the rest of Ottawa… I think they’d be excited to know this video made it all the way to Greece! And… if anyone’s going to Santorini they should pop in to Bella Thira!

And I know you want to know more about what started all this in the first place…  the great food at Bella Thira… so here’s a few photographs of what I ordered tonight. And at the end I’ve posted a link to the original Official video of the Ottawa Greek Fest. And here’s some links to all my photos from my trip to Athens and Santorini and my hike, Walking the rim of a Volcano, from Imerovigli to Oía. 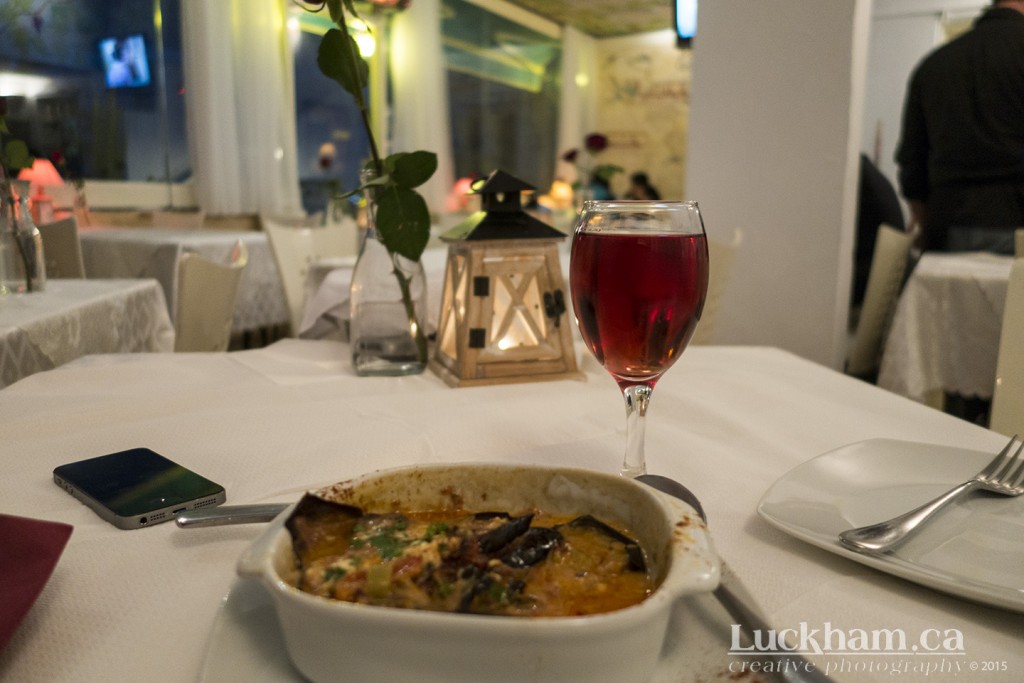 The incredibly delicious Santorini Eggplant that started all this 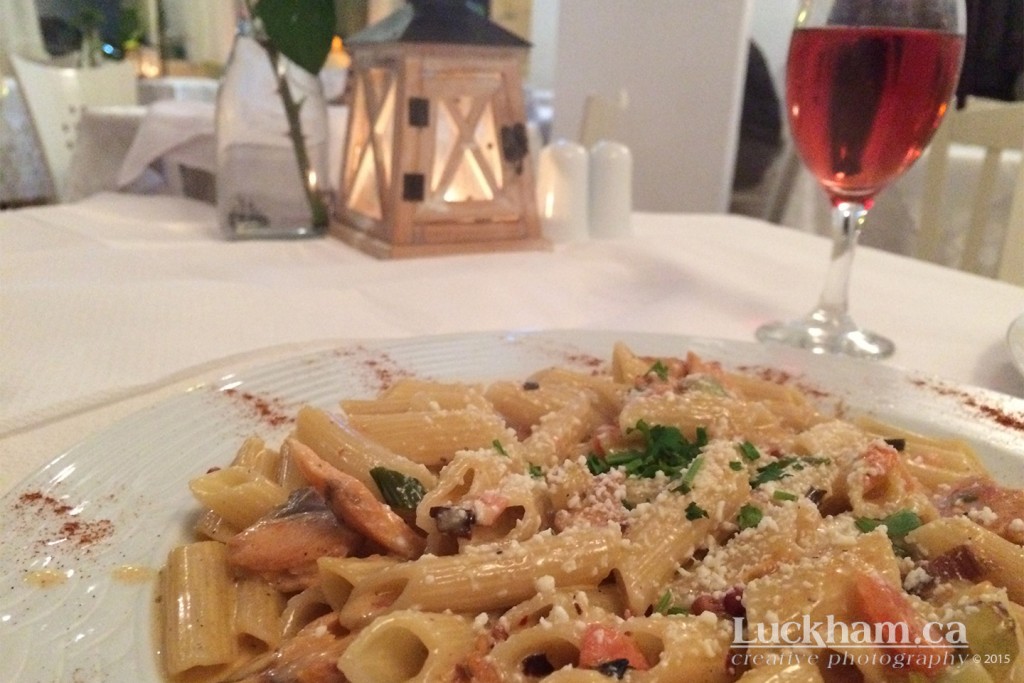 Salmon Penne that was so so good 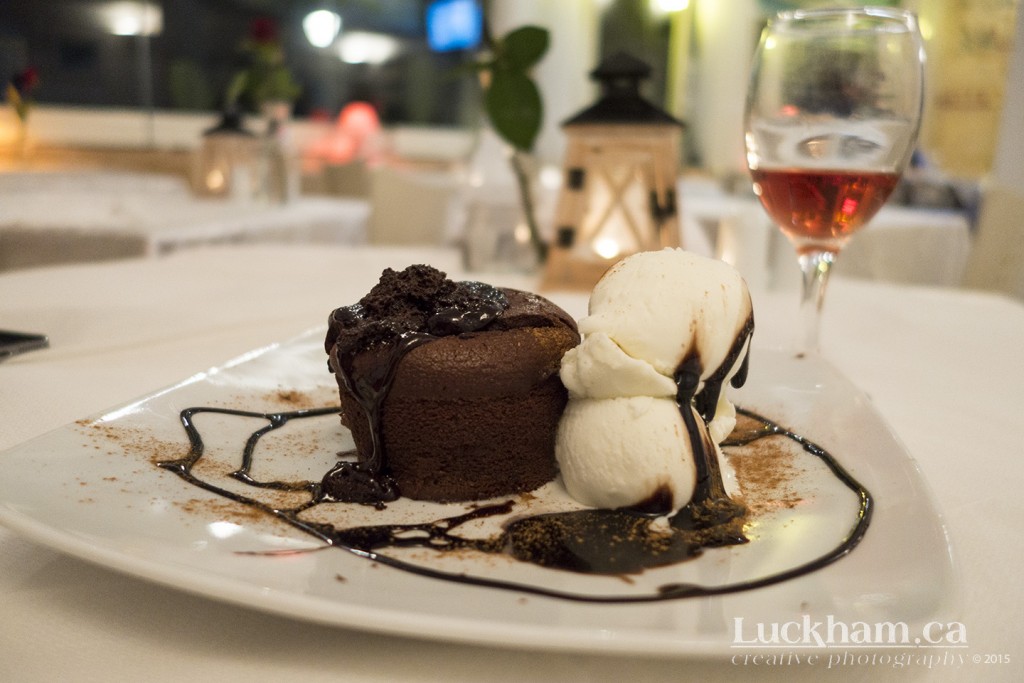 a chocolate soufflé with ice cream to finish up… can you spell decadent? Auto correct helped me with that one! 😉

And here’s the video that made me want to share this story with you all: