Staying Home with The Beetles

This global pandemic is certainly taking it’s toll on all of us and many businesses have to make big adjustments. I’ve been lucky in that I’ve been self-employed for 35 years, most of that working from home, so having to Stay at Home doesn’t change too much for me. Work has dropped off due to some clients being affected, but has also picked up with some, due to what needs to be done because of the pandemic. But even on days when I don’t have a lot of work I try to remain creative, whether out on my bike with my camera, or staying in and setting up photoshoots with my “roommates”!

Prior to this pandemic I had a bit of an infestation of Asian Lady Beetles in my apartment and, to make a long story short, nothing has been done so I am stuck at home with The Beetles! It varies from 4 or 5 every day to as many as 40 in one day! Being a photographer and designer I decided to make the most of the situation and hopefully hang on to my sanity, so…

Ladies and Gentlemen… The Beetles!!!

Click on any photo to enlarge and immerse yourself in the Beetlemania! 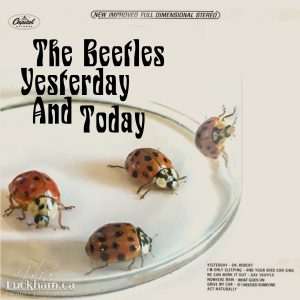 I know we’re all supposed to be social distancing, but that’s kind of hard when you have 20+ visitors every day! As you may know I have The Beetles living with me! “Yesterday and Today” were the highest numbers since they first came over in October last year. Once I get past 20 I lose count and “Yesterday” I lost count! I tell you, ”If I Needed Someone” right now it wouldn’t be “Doctor Robert” it would be a Pest Control guy, they tell me “We Can Work It Out” but with “What Goes On” everywhere right now, I can’t do that, so for now I’ll just “Act Naturally”. If it gets too much, I’ll “Drive My Car” but just a “Day Tripper” to “Nowhere… Man”!

Hope you like my take on the album cover for “Yesterday and Today”! LOL!

Just try to see it my way… Soundtrack: https://youtu.be/Qyclqo_AV2M 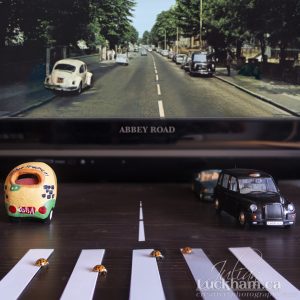 What? No one else wants to come over to play! And you have no idea how difficult this was, let’s just say you should never piss off The Beetles! And before you ask, none of them “Came in Through the Bathroom Window”! And so far I’ve avoided breaking out “Maxwell’s Silver Hammer”, you squash them and they ooze a yellow liquid that smells and stains. I wish they’d just go back to the “Octupus’s Garden” they came from. They first showed up back in October but they were in “Golden Slumbers” over the coldest part of the winter, but no sooner do you say “Here Comes the Sun”, and they “Come Together”!

And if you’re wondering why this is happening… Soundtrack: https://youtu.be/hL0tnrl2L_U 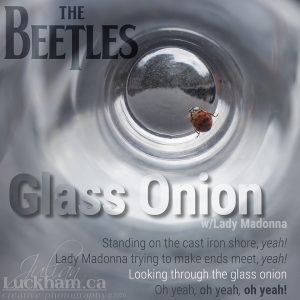 Yes, I’m taking liberties with this one… Glass Onion was never released as a single, nor was it the flip side to Lady Madonna, but given Glass Onion references Lady Madonna, and a number of other Beatles songs, and clearly that is ‘Lady Madonna’ in the photo (note the M on her head) so it just seemed right! I hope you’re getting a chuckle out of these fun distractions! My Beetles infestation would be driving me mad if I weren’t using them as a creative outlet, so this is helping me keep my sanity! Oh yeah, oh yeah, oh yeah!

The 🐞🐞🐞🐞 Part 3!
I told you about the fool on the hill… Soundtrack: https://youtu.be/aBQIAWh3YBs 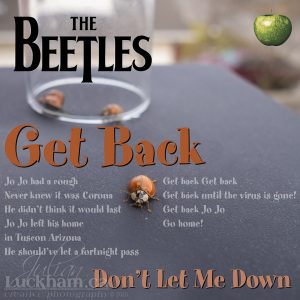 Think of this as a Public Service Announcement… Don’t be like Jo Jo! Stay Home! I’m only taking liberties with the lyrics for this one… when ‘Get Back’ was released the flip side was ‘Don’t Let Me Down’! I hope you enjoy this one, my Beetles infestation is a never ending inspiration and irritation! LOL! And PLEASE, Stay Home… Don’t Let Me Down! 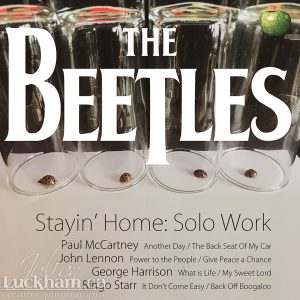 And I’m taking liberties with this one as well… I keep trying to think of Beatles related photos I can create with my “roommates”, so given the “Stay at Home” rule we are all living under, if this had happened in the late ’60s early ’70s, maybe the Beatles would have collaborated on an album that ended up being a collection of their earliest solo work… and maybe the break of being apart for a while would have kept them together… why not! So here it is, my Beetles are in their private quarters and they banged out a few songs.

And so you have something to listen to while we’re all staying home, here are the first singles that each of the Beatles released, and a cool bit of trivia… For the week of April 24, 1971, George Harrison’s “What Is Life,” John Lennon’s “Power to the People” and Paul McCartney’s “Another Day” all made the Billboard Hot 100 chart. Harrison dropped from the chart the following week, May 1, but Ringo Starr’s “It Don’t Come Easy” made its first appearance. Have a listen to all four here: https://ultimateclassicrock.com/beatles-solo-singles-1971/

Just looking at the songs I chose. I chose them because they were the first solo songs to hit the charts, but it’s interesting how each one kind of fits our current predicament, especially Ringo’s! 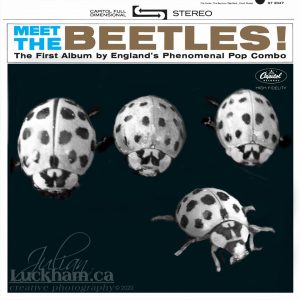 My apologies, I never properly introduced my lady friends who have been staying with me throughout the lockdown, so… Ladies and Gentlemen… The Beetles!

Hopefully “It Won’t Be Long” and this pandemic will be over and you won’t be subjected to these tiresome photoshoots!

The 🐞🐞🐞🐞 Part 6!
Every night when everybody has fun, here am I sitting all on my own… Soundtrack: https://youtu.be/UVKU6SevefY 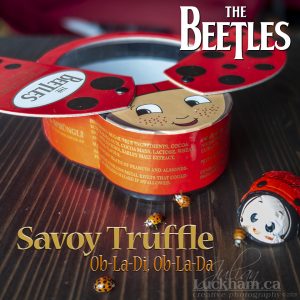 I just had to do this new one today… I was in Shoppers last week and they had these boxes of ‘Lindt Bugs & Bees’ Chocolates on for half price and given The Beetles are rooming with me through this pandemic, how could I not pick up a box and do yet another photoshoot! Did you know that the Beatles wrote a song about chocolates? You’ll recognize it when you hear it! George Harrison wrote ‘Savoy Truffle’ for Eric Clapton who was said to eat too much chocolate. George wrote the song using the names of the chocolates on the inside of a lid of Mackintosh’s Good News Chocolates. Savoy Truffle’s lyrics reference ‘Ob-La-Di, Ob-La-Da’ so it had to be the B-side to this fictitious single.

The chorus line is in reference to having your teeth pulled out after eating the last one, the Savoy Truffle!

The 🐞🐞🐞🐞 Part 7!
You know that what you eat you are, but what is sweet now turns so sour… Soundtrack: https://youtu.be/z9EaBjFvQpc

And so it begins… It’s been 5 months since my last update, but… The Beetles are Back! Will there be a Fall Tour? A new album? Will the new indoor limits due to COVID-19 be respected?

“A leopard can’t change its spots”, but it seems a Beetle can… I’ve never seen one without spots, and with the infestation I’ve been living with for over a year now I’ve seen a lot of Beetles! So this one is rare! As rare as the first ever copy of the White Album? I couldn’t resist!!

I knew the original pressings were number stamped so when I did a search to see what the numbers looked like, for me to create this parody, I found a post about Ringo Starr‘s personal copy of the Beatles‘ The White Album, numbered No.0000001, which sold for a world record $790,000 at auction in 2015. They estimated it would sell for $40,000 to $60,000! The number on my fake copy deliberately has only five 0s, so no one tries to sell it on me! LOL! 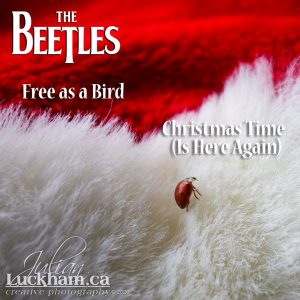 Christmas time is here again, and so are The Beetles! Yep! The Beetles are Back! I know… it’s Winter!!! I told both my landlord and building management that they needed to address the problem with the Asian Lady Beetles before repairing all the caulking for the building, as they would only trap any Beetles still in the building! But what do I know, right! Well, here we are, Beetles for Christmas!

So did you know that the Beatles did a Christmas song? It was recorded as a fans only release back in 1967 and was officially released in 1995 as a b-side to Free as a Bird!

Christmas time is here again, Ain’t been round since you know when… Soundtrack: https://youtu.be/KB7LX8mRRHM 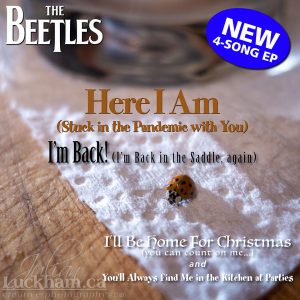 Just when you thought you wouldn’t see them again… the Beetles are back… but I knew it was just a matter of time! Their way out was blocked when the caulking was redone in my building, so they are literally stuck in the building now, thus stuck in this pandemic with me. I had my morning coffee with this one, when he dropped in unexpected in my kitchen. So they’ve really moved in now, in the past they’ve always been close to windows, but there’s no windows in my kitchen, or vents… so it’ll be interesting how long this will last, I hope I don’t go over the COVID limits on the number of guests you can have over for Christmas!

Well, at least I’m still having fun with it… or maybe I’ve just finally lost it!

The 🐞🐞🐞🐞 Part 10!
No Soundtrack for this one as The Beetles (or that other band) never recorded any of these renamed songs! 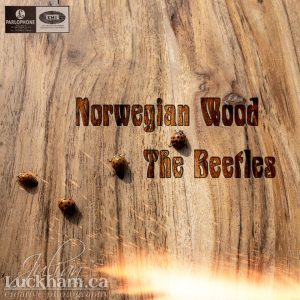 I’ve been told I’ve been conspicuously quiet of late, which is true for a number of reasons… managing this new band is no easy task! 😉

Seriously though, I decided to step back from social media back in January, so I’ve only been popping on when I feel I have something I really want to share. I’m updating this in April and my “lady friends” have been keeping me company as you can see. I’ve always liked the song Norwegian Wood, I’ve been trying to think of a way to do this one for a while, if you know the song, or even the old nursery rhyme “Ladybug, ladybug, fly away home”, you’ll see what I did here! “Isn’t it good?”

Did you know that “Norwegian Wood (This Bird Has Flown)” was only released as a single in Australia? The song is only 2:05 long, so it was released as a double-A side with “Nowhere Man” which was 2:44 and it went to number 1 in May of 1966.

Hope everyone is staying safe! And if you find yourself sleeping in the tub during this pandemic, don’t play with matches!