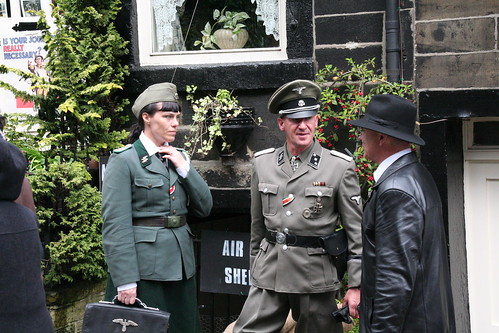 Ensign Ro Laren nervously adjusted her collar, should this SS agent spot the communicator embedded in her Iron Cross, he would surely take her into custody, and then… her head suddenly filled with the horrible tortures the Cardassians had subjected her father to back on Bajor, when she was a child. How had this pre-warp planet taken on all the details, all the history of one of Earth’s worst periods, the rise of the Third Reich on a planet Light Years away? She had to get a message to the Enterprise… she had to get this case to Picard! Should this invasion succeed, it would make the Cardassian occupation of Bajor look like a day on Risa!

I joined a group on Flickr where people post photographs for other Flickr members to write stories about. This is one I wrote when I saw a photo posted by my Flickr Friend PhotoGraham of a Historical 1940s re-enactment weekend. As soon as I saw it I thought the woman on the left looked like Michelle Forbes, Ensign Ro Laren from Star Trek.