Walking the rim of a Volcano!

Can you imagine walking along the rim of a Volcano? Not something I ever imagined myself doing, but that’s exactly what I did earlier this year. In March I took a 2 month trip I call ‘Wherever I Wander‘, that began in Greece with a couple of days in Athens and then a 5 day visit to the island of Santorini. Santorini is a volcano, and the rim is where the villages have been built. Did you know that it has been hypothesized that Santorini could have been the lost city of Atlantis? Santorini is the location of the largest volcanic event on Earth in recorded history, an eruption that devastated the island of Thera (also known as Santorini)! 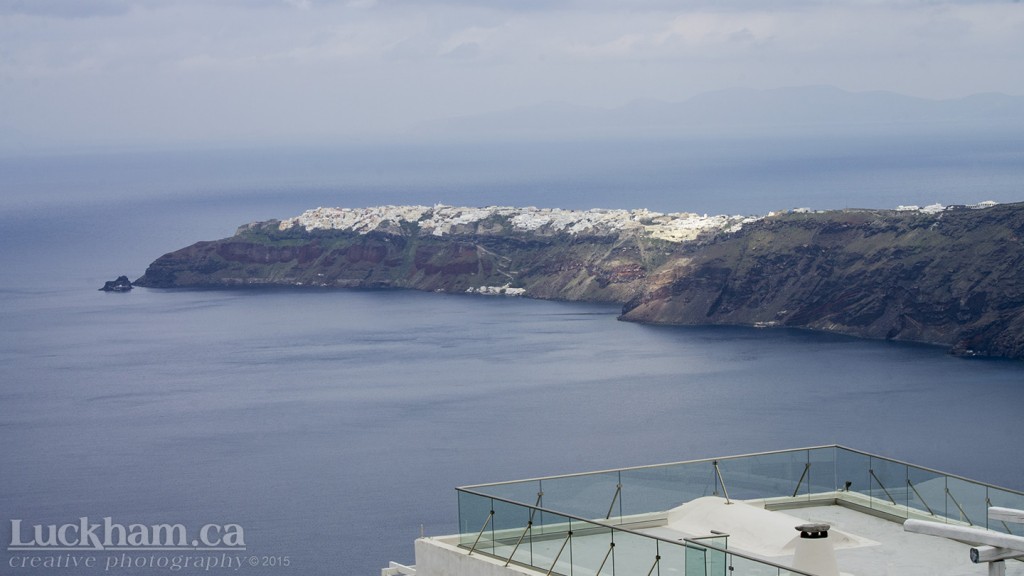 Oía, as seen from Imerovigli, looks like it’s going to be a long hike!

I had read up on what to do while on Santorini and the Santorini hike was listed everywhere as the number one thing to do, and you should not leave the island without doing it. So, it was on the to do list right from the start. What was unexpected was when an impromptu walk on my first day turned in to a hike, and eventually had me climbing Skaros Rock (984 ft.) near where I was staying. It was an incredible experience and one of the most amazing things I’ve ever done. After telling my host at Veranda View in Imerovigli of this turn of events she responded by saying she was no longer worried about me doing the hike to Oía! As much as it was a good warm up, it only took a couple of hours to complete, the hike from Fira to Oía is at least 3 hours one way, so I knew I was still up for a challenge even though the plan was to take the bus back. As I was staying in Imerovigli, which is about 25 minutes north of Fira, I was looking at what I thought would be at least a 2.5 hour hike. Once you allow time for taking photos and admiring the view along the way your hike can easily go longer. Throw in a wind and rain storm and you might not be home in time for supper! Good thing Toto stayed home!

As you’ll see in the video, it wasn’t an easy hike, the highest point of the climb, Mavro Vouno (Black Mountain) was 1300 ft and it was at that point that the weather was not co-operating. It took about 4 hours from when I left Imerovigli to when I first arrived at the tip of the island in Oía (pronounced Ia, not Oya as I keep saying in the video). I ended up getting in to Oía in time to see what it is renowned for, it’s spectacular sunset, and to have dinner. On my way out of the restaurant I asked where one catches the bus to Fira, only to discover that the last bus had already left, but cabs could be found in the center of town. So, a cab it is, a ride that was more a reality check than anything else… you see, I had walked for 4 hours… along the rim of a volcano… through fierce winds… and heavy rain… you hear what I’m saying? The cab, taking the main road down through the middle of the island, took all of 15 minutes to get back to Imerovigli!!

Okay, enough of my rambling, come now on this adventure and walk the rim of a Volcano with me! Yeah, it doesn’t pack quite the punch after telling you about the cab ride, does it! The photos and videos will speak for themselves, but I’d suggest watching the video first as it will add an atmosphere to the slideshow that a photograph can’t really capture. I get a bit repetitive in the video… I was getting out of breath and was very much at a loss for words at times and whatever was in my head just came out of my mouth. It was that kind of experience! I thought about editing a lot out, but decided that would hide the experience of this challenge, so as I say in the video at one point… I’m embracing my weirdness. I hope you do too and I hope you laugh along with me, and enjoy the video even more in it’s unedited form. The sound gets a bit rough due to those fierce winds I spoke of and it’s not terribly steady due to shooting with my iPhone and those same fierce winds. If you ever get a chance to go to Greece, visit Santorini, what is considered one of the most beautiful islands in the world, you’ll be glad you did… and bring a wind breaker and a good umbrella if you go in March!

So, here’s my little 12 minute video of Walking the rim of a Volcano Santorini Hike, followed by a slideshow of photos from just the hike.

And if you like stories about Serendipity, you’re going to want to read Santorini Serendipity! And if you’re a part of the Ottawa Greek Community you have to read it!