What if… Bowie showed up? 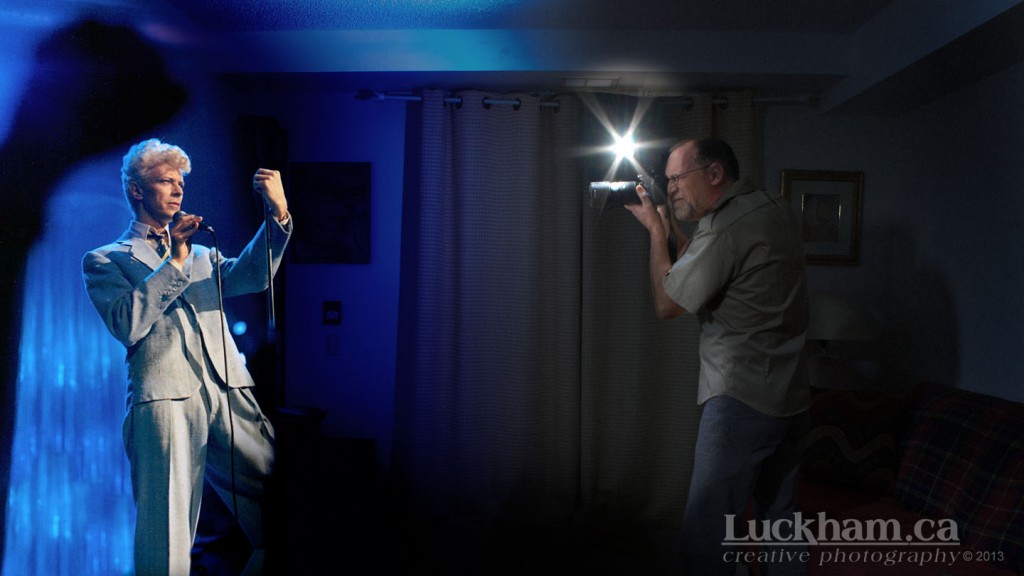 I had a party last night to celebrate the release of the new David Bowie album “The Next Day”… and guess who showed up!

“Shakey threw a party that lasted all night…
Watch that man! Oh honey, watch that man…
he’s only taking care of the room”!

This past week has been interesting in a lot of ways, for me it was “Bowie Week”, due to David Bowie’s first album in 10 years being released on Tuesday in Canada and the U.S., which became a number one album in 39 countries around the world and is now the fastest selling album of 2013! So this week I’ve been listening to a lot of Bowie, and a lot of music in general. It’s taken me back to my days in the music industry and how my friends back then would love to get together just to listen to albums or to throw a party when a new album by one of our favourite artists came out, sometimes it was a house party and sometimes an industry party. The parties thrown by the music industry tended to be at big clubs or recording studios and sometimes the artists themselves would show up, or other artists that happened to be in Vancouver at the time. I met a lot of amazing people back in those days, realities as opposed to illusions! I remember one party, it was for one of Bryan Adam’s albums, I was talking to Bryan and was shocked to see Mick Ronson (David Bowie’s guitarist from the Spiders from Mars, who was producing in Vancouver back then) sitting at the bar, so I sat with him for a while and had a great chat. It’s always nice to have some kind of common ground to talk about when you meet a big artist, so when I finally met David Bowie in ’87, well… there’s me and David Bowie having a nice chat about his old friend Mick! Other amazing moments that come to mind are backstage drinks with Stevie Ray Vaughan (another Bowie connection), having Sushi with Rough Trade’s Carol Pope and Kevan Staples, chatting with all the members of Rush at the Hammersmith in London, being invited in to Ella Fitzgerald’s dressing room for a chat, being backstage with all the guys from Yes… there are others but I’d hate to be accused of name dropping… ooops! I miss my days in the music industry, I miss my music friends… time for a trip to Vancouver me thinks!

Oh… and my party… it ran quite late but it was a lot of fun with a lot of laughs and surprises… some by proxy… and no I’m not telling! 😉

“It’s got nothing to do with you, if one can grasp it.
More idols than realities, I’m OK, you’re so-so, yeah, yeah, yeah
Up the hill backwards, it’ll be alright ooo-ooo”.

This is my What if Weekend Photo Illusion for week 47 of my 52 Weeks Project! Thanks to Lorraine for the inspiration, I noticed no one took their eyes off you… jeez guys, get out much?

This 52 Week Project is part of a new endeavour of mine I call Photo Illusionism, one photo illusion every week for 52 weeks, check out the web site and “Like” my page on Facebook. And remember, if you want one of your own photo illusions, send me a message and let’s talk… I have 5 more to do!