What if… it weren’t an illusion (Part 1) 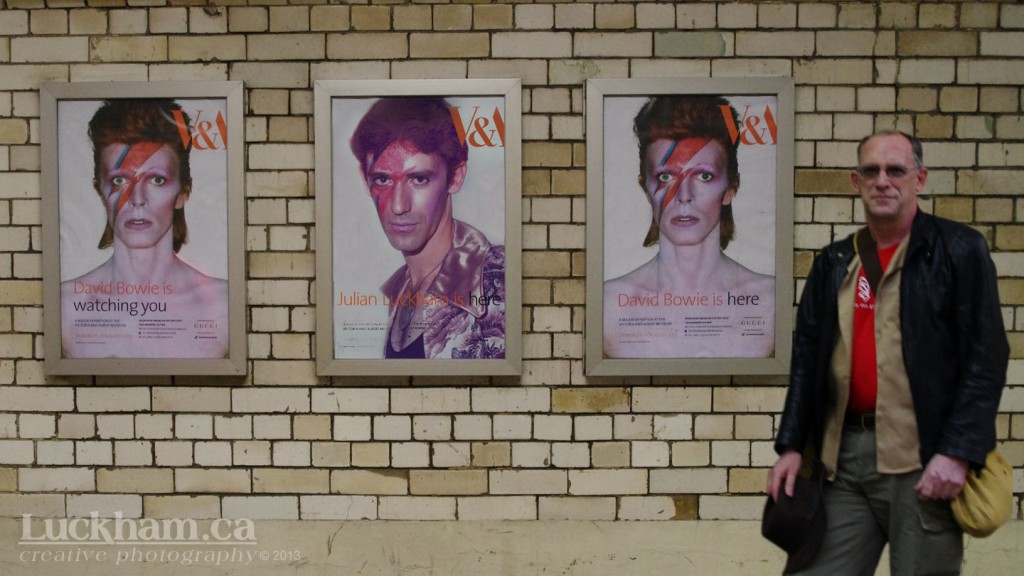 Yes I’m posting a few days early… it’s my birthday today, so I thought I’d treat myself!!!!!! So here it is, my second to last “What if Weekend” Photo Illusion.

A friend of mine told me that, as I’m such a big Bowie fan, I should go see the “David Bowie is” Exhibition that’s at the Victoria and Albert Museum in London, England from March to August this year. I don’t know if you’ve heard about this exhibit, but it’s supposedly pretty amazing. It’s an in depth look at Bowie’s entire career. The show sold out pretty fast, twice as fast as any exhibit the museum has ever put on! I told my friend this and added that yeah I should go, especially as I’m in it!! I was accused of getting reality and my illusions mixed up. But, What if… I am in the show… kind of! I found out that part of the exhibit is a big room dedicated to Bowie’s stage shows and includes many of his stage costumes with photos and videos being shown on large screens behind them. One video they are showing is of Bowie’s September 1984 concert filmed in Vancouver. I was there, right up at the front of the stage… so, if you look real hard you might see me! 😉

I hope you like what I’ve done here with this tribute to the “David Bowie is Exhibition”! Let me know what you think, I’ve snuck in a couple of things with this one, to see what I can get away with… let’s see how many of you can tell what’s real and what’s an illusion!

This is Part 1 of my What if Weekend Photo Illusion for week 51 of my 52 Weeks Project! Thanks to David Bowie for being in yet another one of my photo illusions! LOL!

This 52 Week Project is part of a new endeavour of mine I call Photo Illusionism, one photo illusion every week for 52 weeks, check out the web site and “Like” my page on Facebook.