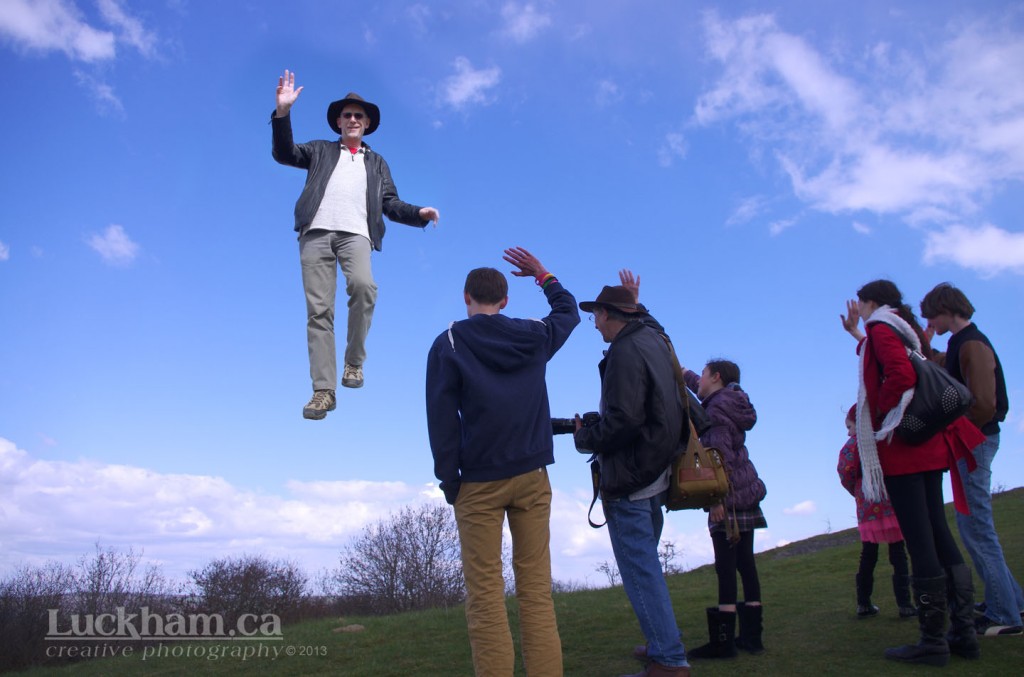 In case you haven’t noticed there’s always a serious side to my photo illusions, for this Weekend’s two part illusion I was wondering how our lives might change if it were easier for us to travel. What if it wasn’t an illusion, and we could really fly! I know if I could fly, I would visit my friends and family out West more often, and over in England if that whole issue of flying over an ocean wasn’t a problem (see part 1). Or what if someone decided to say “To Hell with Heisenberg!” and went ahead and invented the transporter anyway! That would be so great… “Energize!”, and all of a sudden there you are with your twin brother on your Birthday! Sadly, however, even if we could see the people we want to see more often, we would still have to say goodbye when it came time to return to our own daily life and head back home… so, until illusions do come true, let’s wave goodbye to my brother Simon, his wife Julie-Anne and their kids Seth, Jude, Aleah and Sabrina as I fly home.

And on that note, have you figured out yet what’s real and what’s an illusion in these last four photo illusions? Only one person has figured it out, and a few people knew but were sworn to secrecy for the sake of the illusions. So, for those who haven’t figured out the one connection between the last four illusions, it’s that I’ve been in England for the last two weeks. So, they are all only partial illusions.

“What if… it weren’t an illusion” Part 1, is a self portrait of me standing in front of three posters for the “David Bowie is” Exhibition in the London Underground. The illusion is the middle poster which was replaced by a photo of me as Aladdin Sane taken 30 years ago, and I changed the text on the poster to give you a hint. Part 2 is another Underground photo, but this time I replaced one of the ads with a photo of me outside the Victoria & Albert Museum in London on April 17th just before I went in to see the “David Bowie is” Exhibition, which was absolutely amazing, and again there’s a hint in the text on the banner.

“What if… we could fly?” Part 1. Well, I can and I decided it was about time I spent my Birthday with my twin brother in England, so I flew to England on the 16th… in a plane. The only illusion is the flying, but we were in front of the Clifton Suspension bridge in Bristol, England! Together! In Part 2 again, I’m sorry to tell you, I can’t fly under my own power, but I did fly out to see my brother and his family in England.

So, that’s it… this concludes my What if Weekends 52 Weeks Project. And if I can leave you with one thought it would be… it doesn’t have to be an illusion. It’s all about perspective and how badly you want something… We can all fly! So… what are you doing this weekend?

Stay tuned for more news about where I go from here, because I know my illusions can become reality! 🙂

This is Part 2 of my What if Weekend Photo Illusion for week 52 of my 52 Weeks Project! Thanks to my brother Simon and his family for agreeing to be a part of one of my photo illusions!

This 52 Week Project is part of a new endeavour of mine I call Photo Illusionism, one photo illusion every week for 52 weeks, check out the web site and “Like” my page on Facebook.