What if… you had an office in NYC! 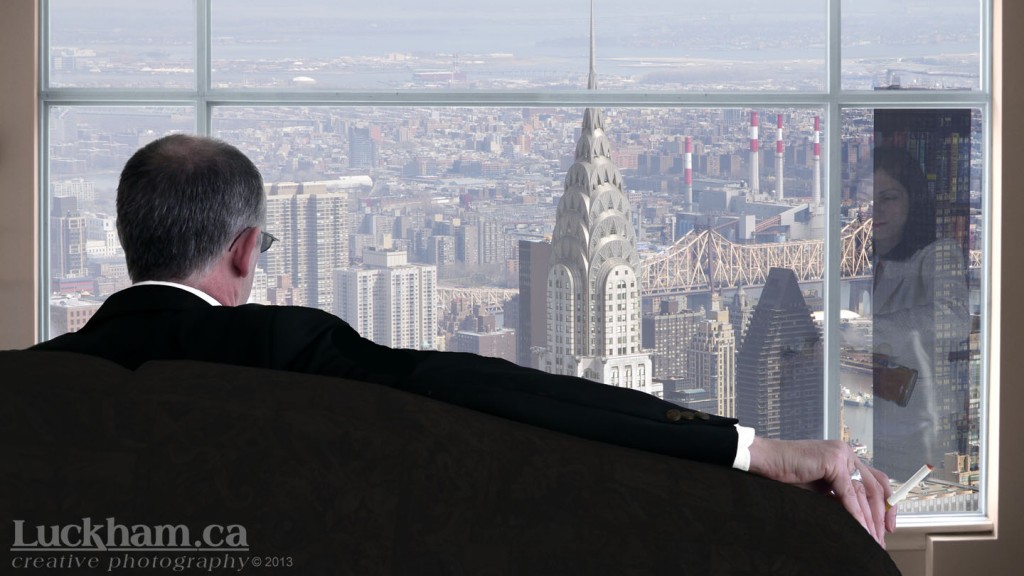 This Illusion is inspired by the AMC TV show Mad Men and I was going to call it “What if… you were a Mad Man?” but I’m not sure I would have been able to handle all the comments! Be nice now… 😉 Mad Men, if you don’t know it is a TV show set in the early 60s at an Advertising Agency on Madison Avenue in New York City. The show is about Don Draper, the Creative Director and founding partner of Sterling Cooper Draper Pryce, and the people in his life. It’s an interesting look at the industry I work in today but the way it was in the 60s. The characters are all smoking and drinking in the office and will often pick up the phone to ask the secretary to “clear my schedule for the day”, it’s a wonder they got any work done at all. Vicki, reflected in the window pouring me a glass of Cuban Rum, is portraying Peggy, Don’s secretary, who in the show goes from secretary to Don’s number two in the creative department, an achievement that was rare for women in the 60s. The show has done extremely well in spite of the controversy it gets for it’s realistic depiction of a very sexist and racist period in U.S. history. I don’t get it when a show, TV or film, get’s criticized for being true to it’s time or situation.

Anyway… an office in NYC? I’ve been to New York City twice in the past two years and I’ve loved it both times and plan to go back hopefully later this year. But don’t you think it would be cool to have an office in New York City? Not sure I’d get much work done, I’d either be staring out the window all day or wandering around exploring and experiencing the city.

This idea came about as a result of an interview I needed to do that you may get to see next week. And no, I haven’t taken up smoking!

This is my What if Weekend Photo Illusion for week 41 of my 52 Weeks Project! Thanks to Vicki Mavraganis for participating in another one of my Illusions, and thanks to Graeme Hay for shooting the photo of me on the couch and the one of what was Vicki and I, but having me reflected in the window as well would have been weird. This one was tricky, as the couch I’m on wasn’t facing a window at all, so I had to shoot some photos of a window, that was nowhere near this big, but… in an illusion, anything is possible.

This 52 Week Project is part of a new endeavour of mine I call Photo Illusionism, one photo illusion every week for 52 weeks, check out the web site and “Like” my page on Facebook. And remember, if you want one of your own photo illusions, send me a message and let’s talk… I have 11 more to do!