What if… your food screamed! 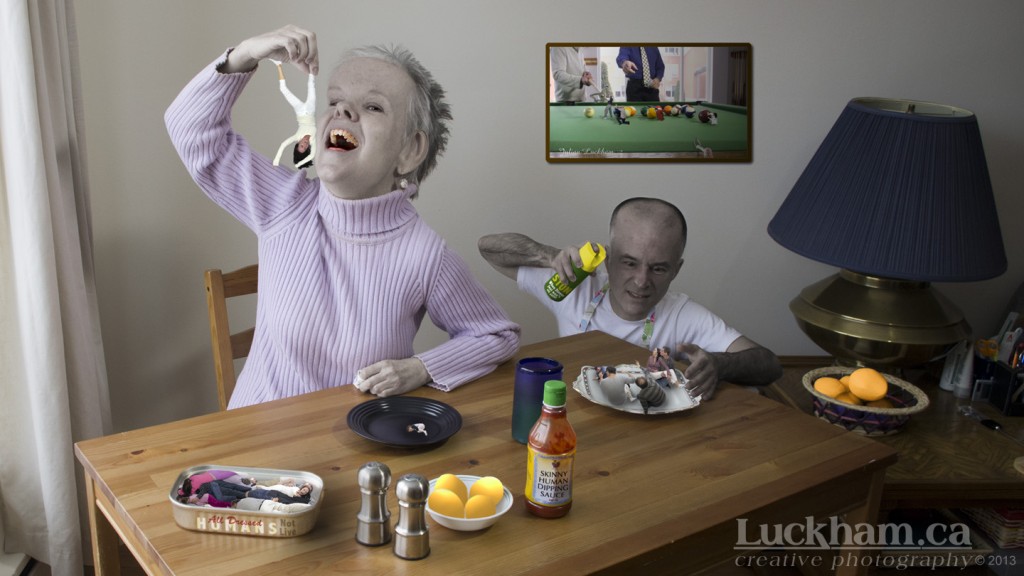 This idea on the eating habits of the indigenous Giant was from Jo Roulston. After discussions with Jo and Allen this is where we went with it… the first idea was “What if you are what you eat”, the next was “What if it wasn’t horse meat”, due to the story in the news about horse meat being passed off as beef, which ended up with us talking about how ones eating habits are a product of society and our culture for the most part. There are things we don’t eat here in Canada that are common foods in other countries. So I wondered how our eating habits would change if we actually had to go out and catch and kill our food rather than buy it at the store ready to cook. What if our food did scream, how would that affect our eating habits?

Now some might think that I’m espousing my choice to be vegetarian, which I’m not, I’m not a vegetarian due to a concern for animals, it was a decision I made years ago for my health… and it worked for me! That said, I’m not safe from screaming food either, a few years ago I read an article about the discovery that vegetables scream! Are you still reading? The discovery was that different vegetables react to being cut or pulled from their roots, or being in any kind of distress, etc. What happens is the plant or vegetable releases a gas, its signal that something is wrong, if that gas is bombarded with lasers it vibrates and makes a sound that can be picked up by specialized microphones. The greater the “stress” the plant experiences, the louder the sound. One of the most interesting results of their experiments was when they tested a cucumber. The cucumber seemed perfectly fine, but when they subjected it to the lasers it was screaming as though in agony! On closer examination it was discovered that the cucumber had developed mildew, but the symptoms were not yet visible. This means by listening to plants and vegetables we can find out if they are infected more than a week before we would actually see the infection. This will help in transporting vegetables by not putting infected produce with good produce or even packing ripe fruit with unripe fruit.

So, food for thought… pun intended… if you think you heard your cucumber scream at you, maybe it’s trying to tell you something and it might be better not to eat it!

This is my What if Weekend Photo Illusion for week 45 of my 52 Weeks Project! Thanks to Jo Roulston, Allen Roulston, Brian Bicknell, John Seed, Graeme Hay, Catherine Mary Clark, Dave Shaw and his daughter Evelyn Shaw for participating in one of my Illusions. Thanks to John Seed for making his home available for the shoot and to John and Dave for holding Catherine up in the air just long enough to tease the Giant without her becoming lunch! And thanks Jo for the fun idea!

No Humans were harmed in the making of this Illusion.

This 52 Week Project is part of a new endeavour of mine I call Photo Illusionism, one photo illusion every week for 52 weeks, check out the web site and “Like” my page on Facebook. And remember, if you want one of your own photo illusions, send me a message and let’s talk… I have 7 more to do!