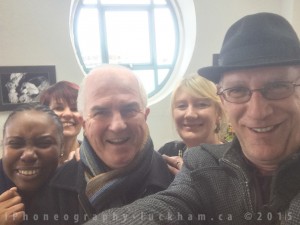 On the U.K. portion of my ‘Wherever I Wander‘ trip earlier this year, I went to Manchester to visit the U.K. offices of my client WIEGO and to see some of my colleagues there. I also wanted to see the city that was, during the late 1800s, one of the richest cities in the world due to being the global centre of the cotton trade at the time (take note of the photo of Abraham Lincoln and be sure to scan the QR code in the 2nd photo for an explanation from the President himself as to why he has a statue in Manchester, you might wonder about Chopin too, and I have a photo of the plaque after to explain – click the pause button in the slideshow to read it). The WIEGO office is in the Royal Exchange, a building with quite a history. The building was used for commodities exchange, mostly cotton and textiles and was was the largest room in the world until World War II when the Luftwaffe bombed Manchester and the Royal Exchange took a direct hit. It was also heavily damaged from the 1996 IRA Manchester bombing. It is still an impressive building but only half its original size and houses the Royal Exchange Theatre.

The Royal Exchange Theatre is rather unique in that it is ‘theatre in the round’ and has been built inside the Great Hall of the Royal Exchange and does not fully rest on the floor. The weight of the theatre and audience would have been too much for the floor to hold, so most of the theatre is suspended from the four columns that hold up the building’s dome. Only the stage and ground level seating is on the floor. With seating for 700 on three floors this is the largest theatre in the round in Britain. 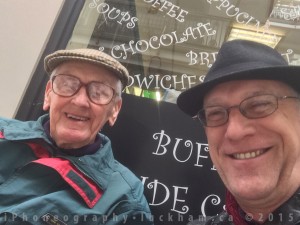 Manchester is a really beautiful city with a number of very impressive buildings to see. Two that drew my attention were The John Rylands Library, an incredibly beautiful library that opened to the public in 1900. Another impressive building that is easy to miss is the Barton Arcade, a Victorian shopping arcade constructed in 1871, that is beautifully built of glass and iron with glass domes. This arcade is considered one of the best examples of cast iron and glass buildings in the country. It was a real pleasure wandering this building and getting some great photos, thanks to the old guy having his lunch at the arcade that showed me how to get up the to 4 levels of long balconies. Thank you good sir, and I will always remember to count to three! Thanks also to Henrial, Joe, Jacqui and Shirley at WIEGO for making me feel so welcome on my unannounced visit and for showing me around your city. Two days was not enough and I will definitely have to come back.

I stayed at the Trafford Hotel, which was the old Trafford Public Hall in Trafford, the home of Manchester United F.C.. I have to say, walking around the hotel felt a bit like being in the Overlook Hotel from the movie The Shining, had I run in to a couple of twins I would have really been freaked! You’ll see what I mean when you view the slide show. 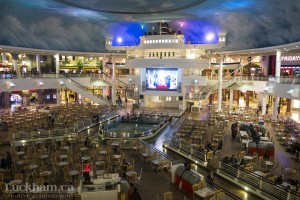 While in Trafford I visited what I think is the most extravagant shopping centre I’ve ever seen, The Trafford Centre. When I was driving by I had no idea what it was but had to stop and find out. What I discovered was the 2nd largest shopping centre in the U.K. which has the largest Food Court in Europe and the busiest cinema in the U.K. The 1,600 seat food court, themed on a 1930s ocean liner called The Orient, has designs from around the world including China, Italy, Egypt, Morocco and New Orleans. In the Great Hall hangs a chandelier that is said to be the largest in the world. This place was so off the hook I may have to do a separate post about it! LOL!

On my second day I took the Tram back in to Manchester to do the tour of Granada Studios Coronation Street sets. I wandered in to Weatherfield and walked down Coronation Street, Rosamund and Victoria Streets and toured the interior and exterior sets as well as backstage areas. As I know there are a lot of fans amongst my friends and here in Canada I’ve put together a separate slide show of my visit to Coronation Street. After the tour I went to a little restaurant in Manchester, Annies, which is owned by actress Jennie McAlpine (Fizz Brown on Coronation Street) and her partner Chris Farr. And yes, Betty’s Hotpot was on the menu, a vegetarian version too!

For now, the slideshow below are all my photos from my visit to Manchester and include a few from a visit to the Granada Studios set of Coronation Street and a few of the aforementioned Trafford Centre. As I get caught up on more photos from my trip I’ll be adding more photos from the North West of England, including a fabulous visit to Liverpool! I may have to split Liverpool and Manchester in to two sets as I know I have a lot of shots from Liverpool and I already have close to 100 photos in this set!

Anyway – enjoy Manchester, check out Weatherfield and put Manchester on your itinerary the next time you’re in the U.K.