Updated 8/31/17 – August 31st marks the 20th Anniversary of the death of Diana Princess of Wales. I mark this date with some kind of remembrance post on social media every year. I have always admired Diana and the work she did and, I know it’s silly but, after meeting her in 1986 (and I use the term ‘meet’ rather loosely), I even felt closer to her. One can only imagine all the good work she would have likely done over the years had she not died so young, many still miss her and I count myself as one!

This photo, the first in the slideshow below, is something I put together from photos I took myself of Princess Diana in 1986 when she opened Expo 86 in Vancouver. 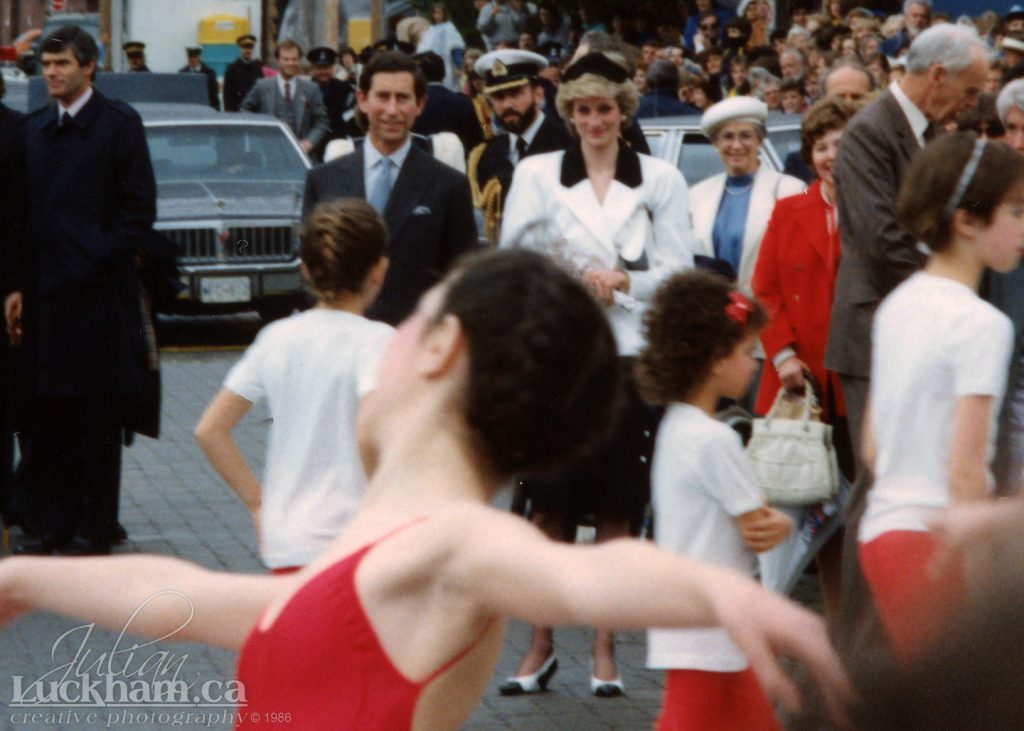 When Prince Charles and Princess Diana visited Vancouver to open the 1986 World Exposition I went down to a few of the locations they were visiting and managed to take quite a few photos. On one occasion I decided I wanted to try to meet her, at the very least shake her hand. So, I went down to Granville Island and took a banner I made that said ‘Cymru am Byth’ (Wales Forever), I’m half Wesh. Charles was the one who spotted my banner and pointed me out to Diana, and they did come over. I wasn’t holding up the sign at that point, so I don’t know if she realized I was the one holding it, but I did get a lovely smile, a whispered “Hello” and shook her hand!

In 2015 my daughter Caitlin and I were on a two month adventure that finished up in Paris and London, where we visited two important spots that relate to Diana. The photo in the slideshow of the Eiffel Tower was taken from the Flamme de la Liberté where Diana died. It’s nice to think that before her car drove in to the tunnel the last thing she saw would have been the Eiffel Tower all lit up, a beautiful sight. I’ve added in a night shot I took, so you can see just how beautiful it is. The next photos are of the Flame of Liberty (Flamme de la Liberté) in Paris since 1989, a full-sized replica of the flame of the torch held by the Statue of Liberty in New York City. The flame became an unofficial memorial for Diana after her 1997 death in the tunnel beneath the Pont de l’Alma where the flame is located. As you can see, it’s covered in love locks and some flowers… for Diana? It was rather strange standing there, knowing what happened beneath our feet, and if you look closely, you’ll see the motorcycle coming out… Diana didn’t! The plaque on the monument in French reads: “The Flame of Liberty. An exact replica of the Statue of Liberty’s flame offered to the people of France by donors throughout the world as a symbol of the Franco-American friendship. On the occasion of the centennial of the International Herald Tribune. Paris 1887-1987.”

The next photo in the slideshow is of The Angel of Truth, part of the Victoria Memorial out front of Buckingham Palace in London. Caitlin and I visited the Palace before taking The Diana Princess of Wales Memorial Walk through Hyde Park. The walk leads to the Princess Diana Memorial Fountain. The plaque you see is also marked for The Canadian Memorial and Buckingham Palace, being near both. The next photos are just taken in Hyde Park as we made our way to the fountain. Caitlin dipped her feet in the waters at the Princess Diana Memorial Fountain… I was not so brave and just dipped my hand. I then added a few photos from my previous visit to London of the fountain and surrounding area including some photos of the famous Peter Pan statue in Kensington Park. I wrap up the slideshow with a few more photos that I took of Diana’s visit to Vancouver back in May of 1986.

Click on the play button below, I hope you enjoy looking through these photos and remember Diana and the incredible person she was!

If you wish to learn more about Princess Diana you can find more information on Wikipedia at this address: https://en.wikipedia.org/wiki/Diana,_Princess_of_Wales