What if… Wonder Woman was turned? 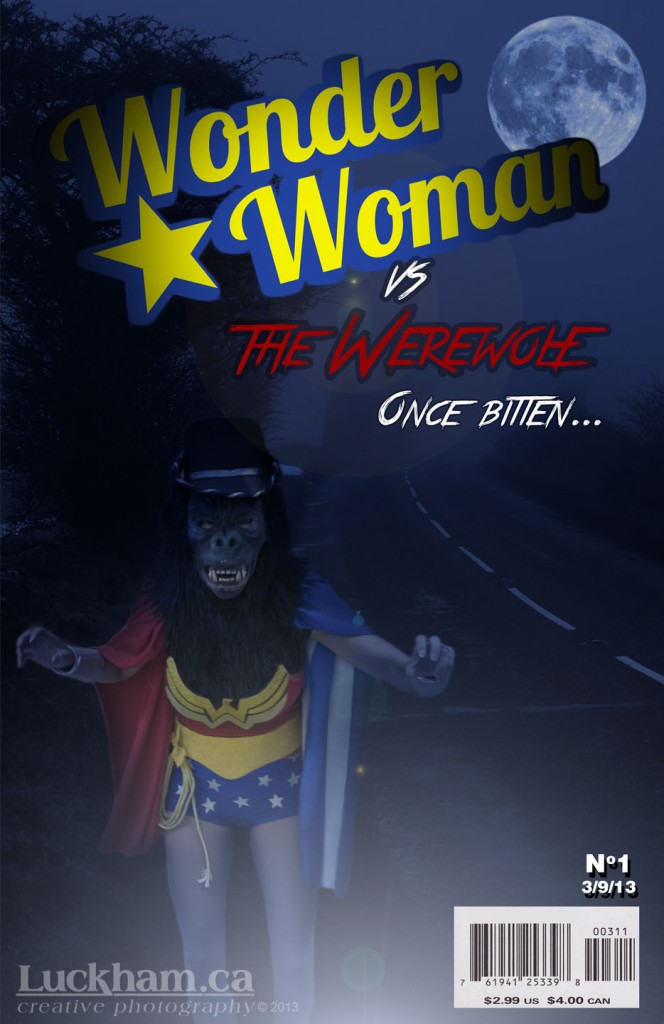 What if Wonder Woman, while out for a late night walk on the Moors was attacked by a Werewolf and bitten, once bitten… would she turn, or would her powers overcome the bite of the Lycan?

Anyway, I should mention here that Catherine Mary Clark who posed for this photo has no idea I’ve made an illusion from it… SURPRISE! I’m posting on Saturday this week because it’s Catherine’s Birthday today, the 9th of March… so Happy Birthday Wonder Woman, I hope you had a Wonder-ful day and you didn’t get bitten by any local Lycans! 🙂

So how did I get this picture you’re asking? The last Wonder Woman Illusion I did back in January, Catherine just happened to have a gorilla/werewolf mask with her… so we shot a few pictures, you never know when that kind of thing might come in handy!!

I always get a kick out of cross-overs, when a character from one show appears on another show. There’s always talk about the next Avengers movie, or Justice League film and who might be in them… and every time there’s any superhero film the speculation as to who the villain might be begins. This is not uncommon in the world of comic books either, and believe it or not what I’m imagining here isn’t far from the mark! There was a series of comic books called “Superman and Batman vs. Vampires and Werewolves” and Wonder Woman was in the first issue. I have no idea what actually transpired as I’m not a comic book reader, but in researching this idea I found this image of poor Wonder Woman being bitten, and we know what happens when you’re bitten by a werewolf… or do we?

This is my What if Weekend Photo Illusion for week 46 of my 52 Weeks Project! Thanks to Catherine Mary Clark for unwittingly participating in yet another one of my Illusions as Wonder Woman.

This 52 Week Project is part of a new endeavour of mine I call Photo Illusionism, one photo illusion every week for 52 weeks, check out the web site and “Like” my page on Facebook. And remember, if you want one of your own photo illusions, send me a message and let’s talk… I have 6 more to do!